We are Interconnected: Laudato Si’ and Covid-19 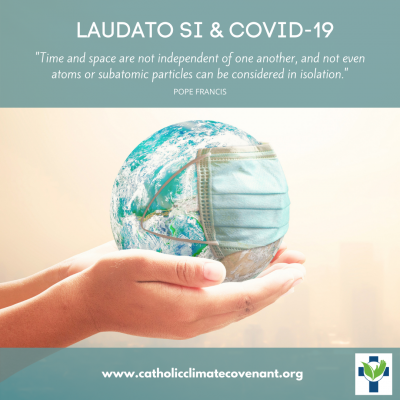 As we begin 2021 in the midst of a global pandemic that began when an infectious organism was transmitted from an animal to humans, we are reminded of the teachings of Laudato Si’: “It cannot be emphasized enough how everything is interconnected. Time and space are not independent of one another, and not even atoms or subatomic particles can be considered in isolation. Just as the different aspects of the planet – physical, chemical and biological – are interrelated, so too living species are part of a network which we will never fully explore and understand.” (138)

Pope Francis wrote these words in 2015. These teachings are parallel to the “One Health” concept described by the Centers for Disease Control and Prevention (CDC,) an approach to health recognizing the connection between the health of people, animals, and the environment. CDC recognized the importance of the relationship between animals and humans and created its Division of Veterinary Medicine in 1947 to study how these relationships can lead to the development of zoonotic infections – infections that spread from animals to humans.

The One Health Commission was created in 2009 to implement One Health actions around the world by raising awareness and educating all audiences about the importance of utilizing a multidisciplinary approach to transform the way that human, animal, plant, and ecosystem health professionals can work together.

The One Health concept has been widely adopted and is clearly illustrated in the “Outbreak” exhibit introduced in 2018 at the Smithsonian Institution’s Museum of Natural History.

Indeed, Pope Francis’s teachings reflect these connections: “Since everything is closely interrelated, and today’s problems call for a vision capable of taking into account every aspect of the global crisis, I suggest that we now consider some elements of an integral ecology, one which clearly respects its human and social dimensions.” (137)  “To seek only a technical remedy to each environmental problem which comes up is to separate what is in reality interconnected and to mask the true and deepest problems of the global system.” (111)

CDC has been working at the local, regional, national, and global levels to achieve optimal health outcomes recognizing the interconnection between people, animals, plants, and their shared environment. Their work recognizes that a “changing climate and changing land use disrupts environmental conditions and habitats creating new opportunities for diseases to pass to animals. International travel and trade moves people, animals, and animal products and can also spread disease across borders and around the globe. Zoonotic diseases can spread between animals and people.”

Pope Francis warned us “Nowadays, for example, we are conscious of the disproportionate and unruly growth of many cities, which have become unhealthy to live in, not only because of pollution caused by toxic emissions but also as a result of urban chaos, poor transportation, and visual pollution and noise.” (44) Urban chaos likely led to the development of Covid-19 allowing the opportunity for the infection to transmit from an animal to people.

It is interesting that the global pandemic we now face was predicted by numerous scientific sources. Through scientific research, sorely needed vaccines were developed in record-breaking time. Now we are faced with the problems that stem from distributing these vaccines in a timely manner beginning with those most vulnerable to the disease. We must recognize that “everything is interconnected, and that genuine care for our own lives and our relationships with nature is inseparable from fraternity, justice and faithfulness to others.” (70)  Pope Francis’ words could not have expressed it more clearly:“A healthy politics is sorely needed, capable of reforming and coordinating institutions, promoting best practices and overcoming undue pressure and bureaucratic inertia.” (181)

Let us hope that the lessons learned from Covid-19may help us to prevent any future pandemics. As Pope Francis recognized “The limits which a healthy, mature and sovereign society must impose are those related to foresight and security, regulatory norms, timely enforcement, the elimination of corruption, effective responses to undesired side-effects of production processes, and appropriate intervention where potential or uncertain risks are involved.” (177)