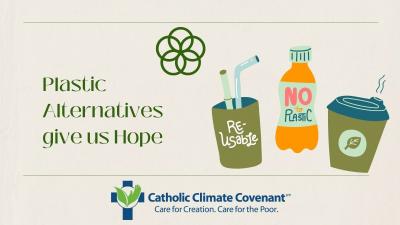 Recently I posted to this blog about my frustrations with trying to live Laudato Si when making beverage purchases. Though I tried to find alternatives, I made a poor ecological choice by buying drinks in plastic bottles because that was the easiest thing to do.

Avoiding the throwaway culture Pope Francis warns against often feels overwhelming, especially in the case of plastic. I am disturbed by the plastic beverage bottles I see everywhere I go – I see them on beaches, hiking trails, and piled high next to the already overflowing trash cans in most cities.

Pope Francis writes in Laudato Si’ that The earth, our home, is beginning to look more and more like an immense pile of filth. In many parts of the planet, the elderly lament that once beautiful landscapes are now covered with rubbish. (LS21) These problems are closely linked to a throwaway culture which affects the excluded just as it quickly reduces things to rubbish. (LS22)

Since most plastic is not recyclable, it contributes greatly to the throwaway culture. I did some research to determine if scientists are developing alternatives to plastic. The Wyss Institute at Harvard is experimenting with various products to replace plastic. I was particularly intrigued by their use of shrimp shells, which contain chitin that can be converted to chitosan, to manufacture objects that rapidly biodegrade in compost. Researchers at Georgia Tech have developed a product made from wood pulp and chitin that is another potential alternative to plastic.

A recent review of plastic alternatives from Earth Easy included some items I have seen in stores such as utensils made from bamboo and cups made from silicone. The article also mentions natural alternative packaging made from mushrooms, seaweed, hay, and banana leaves. While products using these substances are not widely available, the amount of research being invested into plastic alternatives gives me hope for the future. The article encourages the use of glass, metal, or unlined paper packaging whenever possible.

Interestingly, I recently saw some products that support the Earth Easy review. For example, instead of plastic water bottles, I discovered water in 16-ounce paper cartons! I was overjoyed to see this.

In addition, I found that aluminum cans are now available in 16-ounce sizes, and some come with screw-on tops, making them more convenient choices than they were previously. I especially like the screw on caps. It always feels wasteful when I can’t finish my canned beverage, but the flip tab top makes it impossible to carry it around without spilling. 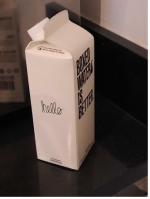 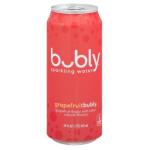 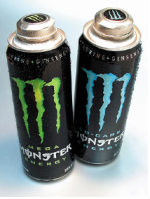 Pope Francis has told us “We have not yet managed to adopt a circular model of production capable of preserving resources for present and future generations, while limiting as much as possible the use of non-renewable resources, moderating their consumption, maximizing their efficient use, reusing and recycling them. A serious consideration of this issue would be one way of counteracting the throwaway culture which affects the entire planet, but it must be said that only limited progress has been made in this regard.” (LS22)

Now we have some small solutions. While paper and aluminum are not 100% recyclable, these newly designed alternatives provide me with some hope that at least we are moving in the right direction. Because while most plasticis not recyclable, according to the U.S. EPA, 68.2% of paper is recycled in the United States and the recycling rate for aluminum cans is 45.2%.

Another way to combat the throwaway culture is with the use of appropriate legislation. I was happy to see that the jurisdiction where I live, Washington, DC, is passing legislation to combat the amount of non-recyclable materials entering our waste stream. In 2017, legislation was passed to assure that food service facilities use only recyclable or compostable materials. (article) In 2019, the District passed a law banning the use of straws and stirrers that are not recyclable or compostable.  (article) In 2010, Washington, DC was one of the first jurisdictions in the country to pass legislation imposing a five-cent charge for the use of plastic bags. The money collected is used to help cleanup the area’s waterways.

As Laudato Si’ tells us “….we cannot fail to consider the effects on people’s lives of environmental deterioration, current models of development and the throwaway culture” (LS43)

Here is to more and better choices for all of us, and for our common home, and for legislation that attempts to limit our throwaway culture.