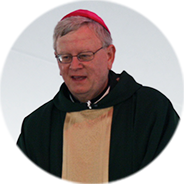 On June 18, 2015, Pope Francis released Laudato Si', his encyclical on ecology. The United States Conference of Catholic Bishops welcomed the Holy Father's letter through the statement of Archbishop Kurtz, USCCB president. Many other bishops added their own individual statements of support, posted resources, or conducted press events in celebration of the release.

The Covenant also worked with a number of dioceses leading up to the encyclical, and are aware of statements or postings (listed below) that encompass 110 bishops in the United States.

(not intended to be comprehensive)