A West Virginia parish cleans up a ‘resurrected river’ 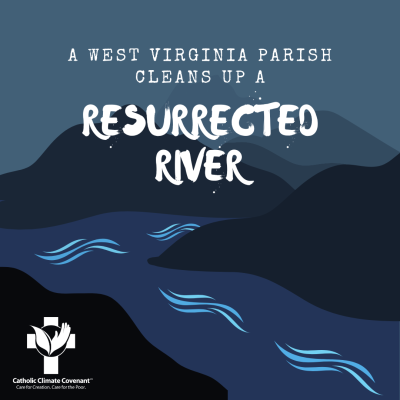 In the Book of Genesis, God’s spirit moves over the waters. Recently, the Creation Care Team at Blessed Sacrament Church in South Charleston, West Virginia decided to move our own spirits — and bodies — over a local waterway in the hopes of cleaning it up.

We began with a series of articles in the church bulletin addressing water in liturgy, in the Pope’s environmental encyclical Laudato Si’, in the many streams and rivers with which West Virginia is blessed and on water quality issues in our state. As a culminating event, we planned a kayak and canoe clean-up trip to a “resurrected river,” one that a volunteer group had brought back from a severely degraded condition.

In 2000, the Coal River was identified by the National Association of Rivers as the dirtiest in West Virginia, particularly with respect to e. coli levels and debris from years of neglect and abuse. The e. coli problem was due in large part to the nearly 1,500 homes along the river that had malfunctioning septic systems.

A group of friends who regularly frequented a bar and restaurant overlooking the river decided to do something about it. Their efforts and concerns resulted in the founding of the non-profit “Coal River Group.” Today the Coal River Group has hundreds of volunteers who regularly work to clean the river of debris, as well as speak out about issues that affect the health of this beautiful river.

In May, despite threats of rain, an intrepid group from Blessed Sacrament  — 20 paddlers, 5 shuttle drivers, and a number of other parishioners —  gathered at the Coal River Group headquarters. As we munched on brown bag lunches on a patio overlooking a falls on the river, Bill Currey, founder of the group and chair of the new West Virginia Flatwater Trail Commission, explained how his group resurrected the river.

At the paddle put-in, Blessed Sacrament pastor Fr. John Finnell blessed our fleet of kayaks and canoes, all paddlers were given trash bags, and our flotilla was launched.

Seven miles and a few hours later, we returned with kayaks and trash bags brimming with various trash picked up in the river: an old helium tank, a beach ball, a baby crib mobile, milk carton containers, a backpack, and a few canoes’ worth of bottles, cups, and containers.

We all made it back safely and without getting too wet. As the last kayaks were being loaded onto cars, the skies opened and the threatened rains came. Inside the shuttles, we were warm and dry. God’s waters had held off just long enough that day.