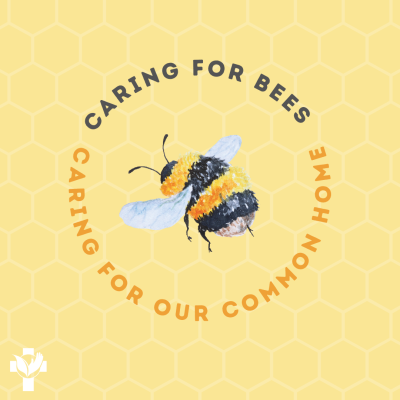 Once upon a time, Kaeley Einheuser would have been the last person to approach a beehive.

But then St. Joseph’s Academy in St. Augustine, Florida, where Einheuser is a senior, hosted a local beekeeper during Earth Week last year.

After learning about the big role tiny bees play as pollinators in the Earth’s ecosystem, she became an ardent, um, bee-liever.

“I used to be really scared of bees,” Einheuser said. “I would totally freak out. Now, I want to save them.”

Einheuser is one of three seniors at St. Joseph’s Academy who founded the school’s new BeeKeeping Club, which has set the Catholic academy abuzz.

Einheuser, Maggie Tibbets and Katie Whitehouse are the club’s Queen Bees, and note with pride that worker bees are female. They’re nature’s original “girl bosses,” they say with a laugh.

On a more serious note, Whitehouse said the climate changes imperiling the planet have revealed the importance of biodiversity, where bees play an outsized part. According to the National Science Foundation bees increase production of about 75% of our crop species.

St. Joseph’s Beekeeping Club, which has attracted 10-15 students to its meetings, strives to educate students about the importance of bees in the ecosystem and give students hands-on experience with caring for beehives.

Well, not exactly “hands on.” The students need protective equipment, including gloves and hats. A recent grant from the Victory Noll Sisters through Catholic Climate Covenant will help them purchase safety gear like suits, so more students can participate. The club is hoping to have its first honey “harvest” in April.

Einheuser, Tibbets and Whitehouse agreed that their interest in beekeeping was inspired not only by science, but by spirituality as well.

“As students at a Catholic school, we are taught to care for everyone and for nature,” said Whitehouse. “We are called upon to be stewards of the Earth. With the beehive, we are giving back to God, sharing in his Creation and showing our respect for nature.”

Tibbets added that bees demonstrate how intricate nature’s ecosystems are, and how even the tiniest pieces have unique and important roles to play.

St. Joseph’s Academy keeps its beehive next to a pond on campus, near a grove of trees and small garden, where they hope to add more flowers. It’s far enough from the school to keep apiary intruders out of the classroom, but occasionally one will buzz into the cafeteria.