St. Francis’s example calls us to joyful transformation with the whole of God’s creation this Season of Creation 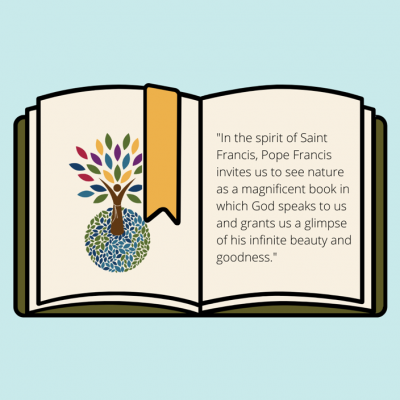 As we celebrate this Season of Creation, we may hear about the idea of an eco-conversion, and the Catholic Climate Covenant’s 2021 Feast of St. Francis Program can help us on this journey. But what is eco-conversion?

In his encyclical Laudato Si’ (“On Care for Our Common Home”), Pope Francis invites a shift in our entire way of living from an egocentric to an ecologically centered way of life. Pope Francis calls people of faith, personally and collectively, to an “integral ecology” that truly cares for and celebrates the radical intimacy of the whole of God’s creation.

The title of the encyclical Laudato Si’heralds Saint Francis’s Canticle of the Creatures, “Praise be to you, my Lord,” where “Francis of Assisi reminds us that our common home is like a sister with whom we share our life and a beautiful mother who opens her arms to embrace us (#1).” Our Sister Mother Earth “cries out to us because of the harm we have inflicted upon her by our irresponsible use and abuse of the goods with which God has endowed us (#2).”

The source of this violence is:

present in our hearts, wounded by sin, [and] also reflected in the symptoms of sickness evident in the soil, in the water, in the air and in all forms of life. This is why the earth herself, burdened and laid waste, is among the most abandoned and maltreated of our poor; she “groans in travail” (Rom 8:22) (#2).

We need to remember with Pope Francis that we are made of the dust of the earth (Gen 2:7), and that from this ground of humility we surrender to the mystery of God’s creation because “our bodies are made up of [the earth’s] elements,” as “we breathe her air and we receive life and refreshment from her waters (#2).”

Laudato Si’ draws deeply upon Saint Francis of Assisi because he is “the example par excellence of care for the vulnerable and of an integral ecology lived out joyfully and authentically (#10).” Saint Francis joyfully demonstrates “just how inseparable the bond is between concern for nature, justice for the poor, commitment to society, and interior peace (#10).”Laudato Si’ highlights the witness of Francis of Assisi to help open us to the “awe and wonder” of gazing at the sun, the moon, or the smallest of creatures (#11).

Pope Francis invites us to “the heart of what it is to be human” and to be united, like Saint Francis, by “bonds of affection” with all creatures in the intimacy of God’s creation (11). If we lose the language of mutuality and beauty in all our relationships with creation, the Pope warns, “our attitude will be that of masters, consumers, ruthless exploiters, unable to set limits on [our] immediate needs (#11).”  However, “If we feel intimately united with all that exists, then sobriety and care will well up spontaneously (#11).”

The poverty of Saint Francis’s spirituality, Pope Francis writes, is “something far more radical” than “a mere veneer of ascetism”; rather, Francis of Assisi refuses to turn God’s creation “into an object simply to be used and controlled (#11).” In the spirit of Saint Francis, Pope Francis invites us to “see nature as a magnificent book in which God speaks to us and grants us a glimpse of his infinite beauty and goodness (#12).”

Truly, we are called to joyful, contemplative transformation with the whole of God’s creation.

If you don’t know where to start on your journey of transformation, the 2021 Feast of St. Francis program “Eco-Conversion: Called to Tend to a Flourishing Garden of Life" can be downloaded free to help you and your family, group or parish, and it can also help you engage with the Vatican’s Laudato Si’ Action Platform. The program contains prayers, readings, reflection/discussion questions, a short video, and suggested activities for this Season of Creation and beyond.