A Season of Creation Harvest: Thousands of Catholics Ask the Administration and Senate to Return Our Nation to International Climate Efforts

In response to the Trump Administration’s announced withdrawal from the Paris Agreement, the Catholic Climate Covenant joined with many of its partners and Catholic faithful across the nation in asking the Administration and the Senate to keep the United States in the Paris Agreement, an international global treaty signed by 194 nations to work together to address climate change.

On Monday November 18, over 1500 Catholic youth and young adults visited their 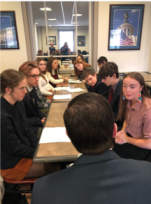 Senators on Capitol Hill in support of the International Climate Accountability Act (S.1743) which requires the Administration to develop a plan to meet U.S. commitments under the agreement.  They also handed their Senators a petition signed by over 58,000 people across the nation, and the Catholic Climate Declaration signed by over 800 U.S. Catholic institutions calling for U.S. participation in international climate agreements.

Their call was bolstered by a statement from the U.S. Conference of Catholic Bishops and Catholic Relief Services, which noted that “Climate change is one of the principal challenges of our time and U.S. withdrawal from the Paris Agreement is a critical step in the wrong direction.” 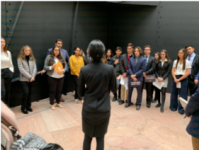 The effort on Capitol Hill was led by the Ignatian Solidarity Network and complemented by the Catholic Climate Covenant, which initiated the declaration and petition as a collaborative effort during the Season of Creation.  The Sisters of Mercy, Leadership Council of Women Religious, Franciscan Action Network, Association of U.S. Catholic Priests, and Columban Center for Advocacy and Outreach also participated.

The Covenant affirms the moral foundation of this call and prays for the diminishment the partisanship which paralyzes climate action, by echoing sentiments by the U.S. Conference of Catholic Bishops, that  "At its core, global climate change is not about economic theory or political platforms, nor about partisan advantage or interest group pressures. . . .  It is about our human stewardship of God's creation and our responsibility to those who come after us. . . . As individuals, as institutions, as a people, we need a change of heart to preserve and protect the planet for our children and for generations yet unborn.”