Protecting sacred seeds in a pandemic, and into the future 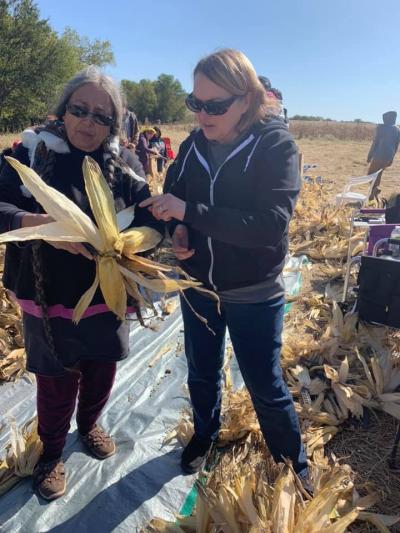 Today we have a story from partners in the Pawnee Seed Preservation Project, an uplifting group working to protect the ancestral corn of the Pawnee. (Photo, right: Deb Echo-Hawk and Ronnie O'Brien at a Pawnee blue corn harvest. Photo credit: Erin Green.)

The story of the sacred heirloom Pawnee corn has had many twists and turns, including being brought back from near extinction almost 20 years ago, and now surviving a pandemic.

The Pawnee Nation’s ancestral lands are located along the basins of the Loup, Platte, and Republican rivers, currently mapped as within the states of Nebraska and Kansas. In the 1870s, some 3,000 Pawnee tribal members were forcibly removed by the federal government to Indian Territory, now Oklahoma.

The Pawnee people took corn seed with them, ancestral corn that had been cultivated for hundreds of years. The corn seeds made it to Oklahoma but struggled in the clay soil. In 1997, Deb Echo-Hawk moved home to Pawnee, Oklahoma and found most corn seed varieties were missing. With the help of elders on the tribal culture committee, an effort was made to find the seed by asking families to look in their homes and their family bundles to replenish the seed. By 2003, only few handfuls of seeds were recouped.

The corn’s survival is imperative. In addition to providing sustenance, the corn is sacred, used in ceremonies and meetings.

“The corn has been there for us since the beginning,” said Deb, known as “Keeper of the Seeds,”  in an interview with Crux. “It’s involved in all of our ceremonies and, historically-speaking, it was probably served daily, so we can’t imagine really being without it.”

The Pawnee Seed Preservation Project started initially in 1998 when elder Nora Pratt blessed three varieties that were recouped with an hour-long prayer. The Pawnee were known as the people of Father Buffalo and Mother Corn. Nora talked about this and how precious the thought was to bring corn back to the people again.

In 2003, Deb was working for the Pawnee Nation Education Department and was contacted by Ronnie O’Brien, who at the time was serving as director of education and operations at Great Platte River Road Archway in Kearney, Nebraska. Ronnie requested garden seeds to teach about the Pawnee people. This request was brought before the Pawnee Nation’s culture committee which decided to take a chance on O’Brien, who had grown up farming corn in Nebraska and had volunteered to plant their precious seeds back in Nebraska soil.

By growing seed in their Nebraska homeland the seed responded well and thus Deb and Ronnie led an effort that has successfully revived the seeds of the Pawnee Seed Preservation Project into a healthy seed bank. Seventeen years later, they now not only cultivate the Pawnee’s sacred corn, but have learned how it grows, and how to strengthen and weaken varieties to match documentation from over 100 years ago. Eventually the two women have grown to become “Corn Sisters,” and the tribe has rekindled a friendship with Nebraskans. All the growers feel like family. 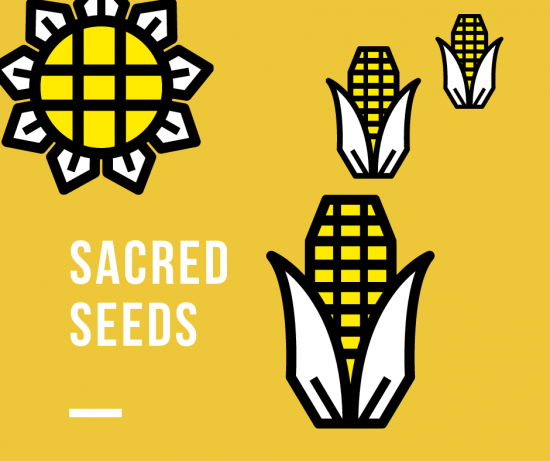 Initially the tribe entrusted the Nebraska growers with one of their most scarce varieties, Kitkahaki Eagle corn, named for dark markings on the cream-colored kernels that made a design to look like an eagle in flight. This variety dates back to the 1200s when the Pawnee traveled toward Nebraska from Central America, according to the Hastings Tribune. Just fifty seeds stored in a single mason jar were designated to go to Nebraska.

The first year, 2004, Ronnie planted 25 of the Eagle Corn seeds, but they rotted due an abnormally cool spring. The next summer, Ronnie enlisted the help of a horticulturalist, Myron Fougeron, and planted the last 25 designated seeds. Through the grace of the Creator, the seeds took hold, thrived in their native soil and climate, and about 2,500 beautiful seeds were produced.

Today, thanks to the project’s patience and persistence, the Pawnee have been able to slowly reintroduce Eagle Corn and 16 other ancestral corn varieties back into their ceremonies and are working towards incorporating the corn back into their diets. The Pawnee Seed Preservation Project now includes 17 gardeners and one farmer across the state of Nebraska, as well as Pawnee gardeners in Oklahoma and wherever the tribal members live. Deb hopes that the project continues to enhance the tribe’s cultural traditions and works to cultivate more healthy minded gardeners and provide meaningful economic development.

Pawnee Nation's Seed Blesser, Nasharo pipe carrier, and elders have offered prayers and prayed over the corn. During several key moments during the journey of this preservation project, both Deb and Ronnie firmly believe that the Catholic Church’s first Native American saint and patroness of ecology, Kateri Tekakwitha, has intervened to ensure the project’s survival.

“I have three rain stories for Kateri,” Deb explained, “where I prayed and asked for help, sought her out, and then everything happened, she helped me out.” Though not Catholic, Deb prayed with a Pawnee prayer group each week for two years in the build-up to Kateri’s 2012 canonization, praying a rosary and a set of Kateri prayers in hopes that the Catholic Church would recognize Kateri’s holiness.

Since 2016, Ronnie says that Kateri is a consistent guide for her in her work with the Pawnee corn. She also credits Kateri with leading her to the Saint Kateri Conservation Center, an organization devoted to inspiring and equipping Catholics to participate in local responses to ecological challenges. Ronnie now volunteers as the Center’s Coordinator for Indigenous Peoples Program, a role she believes will allow her to draw on her experiences with the Pawnee to support similar preservation movements for other tribes, pulling in more Catholics along the way in the spirit of Laudato Si’.Ronnie keeps a Kateri statue in her personal garden in Nebraska to remind her of Kateri’s concerns of the ecological balance and the Pope’s 2015 words:

Culture is more than what we have inherited from the past; it is also, and above all, a living, dynamic, and participatory present reality, which cannot be exceeded as we rethink the relationship between human beings and the environment. (Laudato Si’143)

Deb said it is important to reflect that Pope Francis holds a special place in his heart for the indigenous people, thinking that the Indigenous need to be the leaders to take care of ancestral seeds and provide the food that best benefits the Indigenous. It is encouraging that the Pope’s address to Catholics, Laudato Si’, stresses collaboration when engaging with the Indigenous, not demanding conformity as the past illustrated. Indeed, it will be a healing process to tribes who experienced extreme trauma by the hand of Catholic missions of the past. Deb recalls the infamous quote by Richard Henry Pratt, adding that there will be no more, “Kill the Indian in him, and save the man” mentality.

An Intervention during the Pandemic

This summer, 2020, St. Kateri may have intervened again. When the global pandemic arrived in March, most tribal buildings closed and the corn seeds were moved to different tribal buildings, thus exposing them to humidity and pestilence. A dedicated commercial freezer was needed to protect the seed bank as well as seeds meant to be ground up and sold as cornmeal. Over the next four months, as Deb witnessed the seeds being besieged by bugs, she engaged in a desperate search for a commercial grade freezer big enough to protect them.

In July, Ronnie and other members of the Saint Kateri Conservation Center informed the Catholic Climate Covenant of Deb’s predicament. The Center and the Covenant worked quickly and gathered $2,300 to purchase a commercial-grade freezer for Deb that would protect the seeds and ensure continuance the project.

The plan was for the Pawnee’s ancestral seeds to be safely stored in the commercial grade freezer in order to process and make room for the 2020 harvest and to focus on next goal of finding a permanent commercial kitchen so the freezer will never have to be moved. The pandemic has put a temporary halt to that plan. Access to buildings are restricted, with many experiencing COVID-19 and ill or in quarantine. For now, the harvest is being safely monitored in a below ground cache until it can be stored in the freezer.

The ultimate goal is not only sustainability, as sustaining implies keeping things status quo. Instead regenerative goals are being made to be patient, pray, and adapt, Deb said. She told the Hastings Tribune: “We want to feed our people. We want to have it for all the ceremonies and feasts instead of having it once in a while.”

It’s one thing for a leader to project ideas and initiatives, but it’s another thing to see an actual dialogue. Would Pope Francis want to meet with the people who are actually doing this type of work on the ground? Deb said she would love to see the Pope at the next harvest pulling some husks back and looking at it. “Why can’t he give a stamp of approval on these efforts?”, she asks. “The majority of U.S. tribes were ripped away from their sacred ancestral soil, where their crops were successful for thousands of years. Why can’t we welcome them back to their traditional homelands - do what we, the Pawnee and Seed Preservation Project, did without complications. Imagine what the Tribal Councils will be thinking if the Pope supports these efforts?”

Small steps made by the Pawnee Nation, the Saint Kateri Conservation Center, and the Catholic Climate Covenant offer a model for future collaboration.

We never know where the seeds will take us.