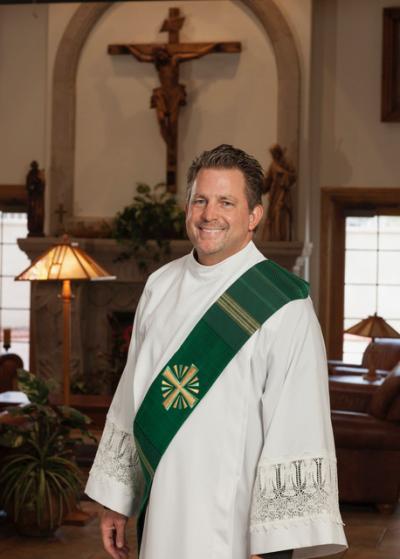 Las Vegas’ nightlife is a prime attraction for risk-takers looking to make a quick buck, but the city’s long days of sunlight struck Deacon Thomas Roberts as a far better opportunity.

So when it came time for Catholic Charities of Southern Nevada to renovate its 20-year-old campus, Roberts placed a big stack of chips -- in the form of 1,200 photovoltaic panels -- on solar energy.

“Pardon the pun, but we knew it was a pretty good bet for us,” Roberts joked in a recent interview. “We get a lot of sunshine out here in the desert.”

Deacon Roberts and his team worked with Catholic Energies to make the solar project possible. (Catholic Energies is a program of Catholic Climate Covenant.) The deacon said the solar panel and LED lights are being tested and he hopes to flip the “on” switch by the end of the year.

A former developer, he was in the gaming industry for nearly 25 years before becoming CEO of Catholic Charities of Southern Nevada in 2011, and he has called the new project one of the largest nonprofit solar projects in the state.

“We are a pretty big campus: Seven acres, with a $25 million annual budget and we serve 3,000-4,000 people every day,” Roberts said. “I like to joke that we’re like a hotel casino without the gambling.”

Nevada Gov. Steve Sislak visited Catholic Charities of Southern Nevada’s campus in August to tout the project, calling it a “step forward” in protecting the environment and vulnerable people. And, the governor hinted, he hopes what happened in Vegas doesn’t necessarily stay there.

“Hopefully this will be an example for other nonprofits to follow,” Sislak said.

In all, Catholic Charities of Southern Nevada’s project included installing 1,204 photovoltaic panels on a new roof and retrofitting the seven-acre campus with LED lights. Those installations cost around $2 million, part of a $15 million rebuild of the aging campus.

The solar panels are expected to produce 550 kwh per year, enough to meet about 30% of the charity’s energy demand, and the LED lighting will reduce energy demand by as much as 40%, according to Catholic Charities of Southern Nevada.

The money saved will be reinvested in serving the region’s people, many of whom have been economically devastated by the Covid-19 pandemic. The charity operates 16 programs, feeding upwards of 2,500, operating the state’s largest Meals on Wheels program, providing emergency shelter and housing, and helping to resettle refugees and immigrants.

“In Southern Nevada, we are in the middle of one of the most desperate places, where people really need help,” Roberts said. “We are right where Pope Francis said we need to be.”

The deacon counts the pontiff’s increasingly vocal environmental activism as a prime inspiration for the project, calling him “exactly what the world needs right now.”

But he also credits Catholic Energies with providing crucial know-how.

“The nice thing for us is that Catholics Energies is a subject-matter expert. This is what they do. I would be over my skis if I tried to do this by myself,” Roberts said. “Catholic Energies went out and got the investor and has handled a great deal of the technical aspects of the project. My advice to others would be to partner with someone who knows what they’re doing.”

Perhaps, if enough charities and companies follow suit, Las Vegas will need to ditch the Sin City nickname in favor of something a little more sunny.