For My Generation, Environmental Protection isn’t a Red vs. Blue Issue, it’s a Catholic One! 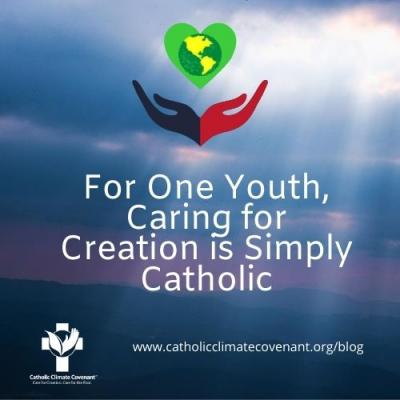 My first educational experience regarding the environment, and the steep hill of degradation it is evidently facing, was in AP Environmental Science during my senior year of high school. I remember particularly being enthralled by the documentary Chasing Coral (if you haven't seen it, it's on Netflix and totally worth viewing!) That year and the ones since I have been taught by society at large that if you support environmental protection, you are a liberal, and that others either believe climate change is a hoax or that the issue will resolve itself without human intervention. This was the rhetoric that led me to live a double life that followed me into college.

"I am a Catholic, but I believe in climate change," I would say. It was as if I had to justify my stance on finding beauty in the natural world around me. Many of my friends, classmates, and professors would look at me dumbfounded as if they had never met a faithful conservationist. "You can't be both," so many would remark. For a while, I believed them. I would separate my life and extracurricular activities into ones that supported my Catholic faith, from the ones that showcased my love for the environment. This was until I discovered the Catholic Climate Covenant and Laudato Si'.

In Laudato Si'Pope Francis so beautifully lays out why everyone, particularly Catholics, are called to protect the environment and allow it to flourish. The common argument I would employ prior to discovering these resources was God created this world for us to live in, and it is, therefore, our duty to protect it and not destroy it. Destroying the environment is destroying God's creation. While this is fundamentally true, there is so much more to the story. The core of protecting the environment and living as ecologically responsible beings comes down to preserving the dignity of human life.

This was never a perspective I considered, but Pope Francis explains it convincingly.

"The destruction of the human environment is extremely serious, not only because God has entrusted the world to us men and women, but because human life is itself a gift which must be defended from various forms of debasement" (Laudato Si'5).

See, if we don't care for the world around us, how will it support future generations? It is undeniable that as Catholics, we believe in the beauty and dignity of life, but we must stop to consider how life receives the resources it needs to flourish.

We have been entrusted with an Earth that can provide for our needs. Yes, we have dominion over the plants and animals, but if our actions destroy the very things that are meant to support us, what will be left for our descendants to use?

Every generation needs water, food, and clean air. Ensuring the availability of these is not a political issue; it is a Catholic one. As the pro-life generation, we must ensure that we are not only protecting all life but ensuring that we are leaving behind a planet they can live and thrive in.

Claire Jackson is a sophomore studying political science and environmental social science at the University of Mary Washington in Fredericksburg, VA. She is the communications leader for her Catholic Campus ministry. In her spare time, she enjoys reading, biking, and spending time in the great outdoors.