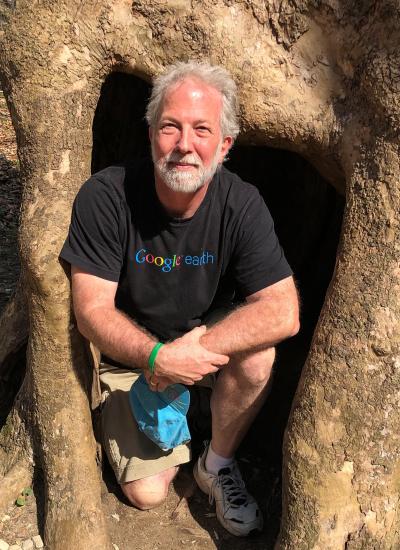 John Mundell’s company is located in Indianapolis, Indiana, but his workplace is essentially worldwide. Since beginning his career as an environmental engineer in the 1980s, Mundell has been part of teams that have cleaned up thousands of sites, including some of the most hazardous in the world. Restoring contaminated land and returning it to local communities is deeply satisfying work, Mundell says, and dovetails nicely with his Catholic faith.

Mundell now has an opportunity to deepen that connection. In July, the Vatican announced that the Indiana native had been appointed Director of the Laudato Si’ Action Platform, a Rome-led campaign to inspire and equip Catholics to live out the mission laid out by Pope Francis in his encyclical Laudato Si': “to dare to turn to what is happening around the world into our own personal suffering and thus to discover what each of us can do about it.”

According to National Catholic Reporter, as of April 4,500 Catholic institutions and families had registered to take part in the seven-year initiative, which organized around seven goals, from the adoption of sustainable lifestyles to working for ecological justice. Given that the church has 1.5 billion members worldwide, there is plenty of room to grow. More can be done to enlist parishes, colleges, dioceses, communities and families in this urgent work.

In an interview with Catholic Climate Covenant, Mundell spoke to that aim, saying he wants to make enrolling in the platform as easy as possible for as many people as possible. He also spoke about his Catholic faith, how he got into environmental work, what he would say to bishops reluctant to commit to the Laudato Si’ Action Platform and where he finds hope on our rapidly degrading planet. This interview has been edited for length and clarity.

Thanks for taking the time to answer our questions, John. Can you tell us how you got started in environmental work?

I loved exploring the outdoors with my childhood friends. Being from Indiana, I grew up with a certain passion and respect for the land. I was strongly influenced by my participation in the first Earth Day in 1970, cleaning up trash along the roadways on the way to school.

The environmental seed that was planted would grow after I graduated from Purdue University and began working on projects that needed technical expertise and ability to find solutions to some of the most pressing environmental situations we faced.

You’re a Catholic and an environmental engineer. What connections do you see between your faith and your ecological work?

The connection between my faith and my work grew over time, along with my understanding of the value of work in building the kind of world we are called to participate in as Christians. I started my own firm 27 years ago to become part of the Focolare Movement’s Economy of Communion, a business network that focuses on addressing economic inequality -- with the vision of “no one in need,” as described in the Acts of the Apostles when the first Christians practiced the communion of goods.

I wanted to be able to practice my values and faith as a Catholic in my everyday work life. This meant making decisions that followed gospel principles rather than just maximizing the return on investment for shareholders.

To have ecology and the environment highlighted by Pope Francis in his encyclical Laudato Si’ provided added meaning to the work – to see the connections between what we do and the protection of the planet feels immensely satisfying.

Can you share a bit about how you were selected for this role?

I was part of the Creation Care Commission in the Archdiocese of Indianapolis, where we have worked on moving the Archdiocese ahead in its commitment to creation care by, among other things, piloting a sustainability program with parishes and a high school; developing a website to provide resources for parishes and others; and lobbying the state legislature for sustainable energy and other environmental programs.

After the publication of Laudato Si’, I attended a Vatican event to launch efforts to put the encyclical into practice and became involved in the Global Catholic Climate Movement (now Laudato Si Movement). I continued to provide consulting to the Vatican’s Dicastery for Promoting Integral Human Development and participated in groups that helped develop the Laudato Si Action Platform. Recently, I was asked to be part of a smaller group to evaluate the LSAP and suggest ideas for its future direction.

What is your vision for the LSAP and what do you see as its primary goal?

My vision, hopefully, is consistent with Pope Francis’ vision, and that is to support and encourage concrete actions that put Laudato Si’ into practice in very real ways --  not only by Catholics, but also by people of other religions or no formal association with a religion. The problem  we face is clear: our climate is changing and causing significant negative impacts, especially on the most vulnerable. Our planet is suffering. We’ve spent the past seven years doing a lot of talking, thinking, praying and discussing, but the real work lies ahead of us. We must now begin to turn our reflections into direct actions and change our lives and lifestyles. The Catholic community, with our social teaching, is uniquely positioned to play a major role in moving the needle in a direction that protects the planet.

How do you see the LSAP evolving in the near future?

We want to make enrollment in the LSAP as easy as possible so that we can engage as many people as possible in the development of specific action plans. We want the LSAP to focus on the achievement of the seven Laudato Si’ Goals. And we want the LSAP to encourage and support local efforts and to create a community that works together to bring about these positive outcomes.

How can US Catholics best live out the message of Laudato Si’?

It starts with ourselves and the individual “ecological conversions” Pope Francis calls us to make. It’s hard to tell others what to do if we do not provide an example. I think American Catholics are especially called to an examination of conscience regarding our lifestyles. Are we living out our Catholic faith in all of its beauty and fullness? Moving toward a lifestyle focused less on having than being is perhaps the first step toward tackling our unsustainable desires for more stuff.

By my count, only seven dioceses have signed up for the LSAP. How would you encourage bishops and dioceses to get more engaged with the platform?

Their signing up officially is so important. It’s a visible sign that says “This is important to us, and we are committed to becoming more authentic stewards of our planet.” The faithful need this kind of moral leadership to help them take the same step.

But let’s face it, the bishops are faced with many pressing concerns in their day-to-day management of dioceses. What I would say to them is this: the need for action can be incorporated into everything they are already dealing with at the diocesan level.

Also, do not underestimate the importance of creation care to the Catholic faithful, who see it as a core moral imperative. The LSAP offers them a unique way to engage the next generation of Catholics by addressing one of their biggest concerns. The LSAP offers many Catholics who are inactive or have left the Church a way to be involved in activities that can make a big difference in the world.

Things look pretty bleak, climate-wise, these days. Where do you find hope?

I find hope in Catholic schoolchildren who replace their throw-away lunch plates with reusable ones. I find hope in a priest whose parish plants two hundred trees to fight climate change. I find hope in a parish that installs a solar array so that they can invest their monthly savings in supporting outreach programs for the homeless. I find hope in seeing Catholics, Christians, Muslims and Jews working together on climate action and creation care, when they have never worked on any project together before. I find hope in religious sisters who commit a part of their retirement funds and savings to providing grants to people who start creation care projects in their neighborhoods. I find hope in a Pope who dares to call us to change the world, to become protagonists in the fight for survival of thousands of species. I have hope in a human being who looked out on a pretty bleak outcome and yet believed in a God who loves us immensely and never abandons us. As Chiara Lubich, founder of the Focolare Movement once said: “It is only at night that we can see the stars.”