Laudato Si’ and the Importance of Ecosystems: The Example of the Yellowstone Wolves 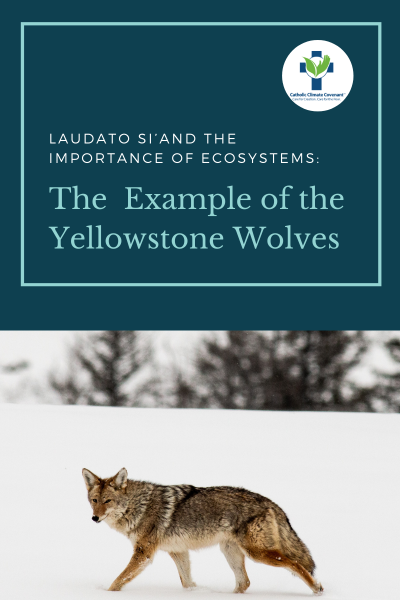 (Photo by Lloyd Blunk via Unsplash)

“Because all creatures are connected, each must be cherished with love and respect, for all of us as living creatures are dependent on one another. Each area is responsible for the care of this family. This will require undertaking a careful inventory of the species which it hosts, with a view to developing programmes and strategies of protection with particular care for safeguarding species heading towards extinction.” (Laudato Si’ 42)

This passage from Laudato Si’ makes me think of one of the best examples of the interdependence of all living creatures and at the same time a successful strategy for species and ecosystem protection: the reintroduction of wolves to Yellowstone National Park.

As the National Park Service documents, the gray wolf was present in Yellowstone when the park was established in 1872. Expansion across the United States in the 19thand 20thcenturies brought settlers West and their livestock into direct contact with native predator and prey species. Much of the wolves’ prey base was destroyed as agriculture flourished. With the prey base removed, wolves began to prey on domestic stock, which resulted in humans eliminating wolves from most of their historical range, including in Yellowstone National Park. “By the mid-1900s, wolves had been almost entirely eliminated from the 48 states,” the National Park Service states.This tragic history is consistent with Pope Francis’ warnings that “Where profits alone count, there can be no thinking about the rhythms of nature, its phases of decay and regeneration, or the complexity of ecosystems which may be gravely upset by human intervention.” (Laudato Si’ 190)

Then in the 1960s, National Park Service wildlife management policy changed to allow wildlife populations to manage themselves. And throughout the 1960s and 1970s, national awareness of environmental issues and consequences led to the passage of many laws designed to correct the mistakes of the past and help prevent similar mistakes in the future. One such law was the Endangered Species Act (ESA), passed in 1973. The law requires the Fish and Wildlife Service to restore endangered species that have been eliminated, if possible. The act explicitly mentions and highlights the protection of ecosystems. This matches what Pope Francis teaches us that “The establishment of a legal framework which can set clear boundaries and ensure the protection of ecosystems has become indispensable….” (Laudato Si’ 53)

Finally, on the path to wolf restoration – after much objection and court interference – wildlife biologists captured wolves in Canada and relocated and released them in both Yellowstone National Park and central Idaho in late 1994 and early 1995, and again in 1996. What happened next is considered to be one of the most significant wildlife conservation events of the 20thcentury. In Yellowstone, biologists have had the rare, almost unique, opportunity to document what happens when an ecosystem becomes whole again -- what happens when a key species is added back into the ecosystem equation.

The reintroduction of wolves continues to astonish biologists with its ripple of direct and indirect consequences throughout the ecosystem. The absence of wolves had allowed elk populations to increase, eliminating much of the young willow, aspen, and cottonwood plants which in turn made it difficult for beavers to survive due to lack of feeding sources. Now that the wolves are back, the beaver population is flourishing. As the beavers spread and built new dams and ponds, a cascading effect continued because their dams have multiple effects on stream hydrology and provide habitats for other animals. The wolves have ultimately changed the behavior of the rivers. This is documented in a wonderful video that shows trophic cascades and other water patterns. Laudato Si’reminds us “….water is an issue of primary importance, since it is indispensable for human life and for supporting terrestrial and aquatic ecosystems” (Laudato Si’ 28.) Pope Francis also noted “In assessing the environmental impact of any project, concern is usually shown for its effects on soil, water, and air, yet few careful studies are made of its impact on biodiversity, as if the loss of species or animals and plant groups were of little importance.” (Laudato Si’ 35)

Having more wolves has also benefited scavengers both big and small, including ravens, eagles, magpies, coyotes, and bears. Scavengers now depend on wolf-killed elk. The increase in vegetation due to the reduction in elk increased the number of songbirds and migratory birds. The wolves killed coyotes so the number of rabbits and mice rose which provided more food for hawks, weasels, foxes, and badgers. As Pope Francis noted “Some less numerous species, although generally unseen, nonetheless play a critical role in maintaining the equilibrium of a particular place.” (Laudato Si’ 34)

Scientists have a wonderful opportunity to continue to study the impact on biodiversity of the reintroduction of species such as the wolves at Yellowstone.

Among Pope Francis’ recommendations:“Greater investment needs to be made in research aimed at understanding more fully the functioning of ecosystems and adequately analyzing the different variables associated with any significant modification of the environment.” (Laudato Si’ 42) Ongoing research should also give us a better understanding of how different creatures relate to one another in making up the larger units which today we term “ecosystems”. We take these systems into account not only to determine how best to use them, but also because they have an intrinsic value independent of their usefulness. Each organism, as a creature of God, is good and admirable in itself; the same is true of the harmonious ensemble of organisms existing in a defined space and functioning as a system. (Laudato Si’ 140)

The success of the reintroduction of wolves at Yellowstone cannot offset the global loss of species and ecosystems that abounds. Laudato Si’ reminds us that “Each year sees the disappearance of thousands of plant and animal species which we will never know, which our children will never see, because they have been lost forever. The great majority become extinct for reasons related to human activity. Because of us, thousands of species will no longer give glory to God by their very existence, nor convey their message to us. We have no such right.” (Laudato Si’ 33)

Let us pray that the Yellowstone experience is replicated many times over throughout our global community.