Happy July to all! We hope your summer is relaxing and you’re finding time to enjoy the outdoors. A short and to-the-point message from me this month.

Action of the Month

Catholics Are Still In Campaign-Now Open to Individual Signatures!

Thanks to many to you, the Catholic Climate Declaration has gathered over 700 institutional signatures. Thank you!

We are excited to open up the signature gathering to individuals. To add your name to the Catholic Climate Declaration sign here:

Share the link with friends, family, and others in your community.

Of course, we are continuing to gather institutional signatures. For more info go here and read below.

As of July 9th, there are 714 Catholic institutional signatures on the Catholic Climate Declaration.

You can read the press release of the launch of the Declaration here and check to see who has signed here.

We urge you to continue gathering signatures from Catholic institutions! We welcome signatures until September 12, 2018, the start of the Global Climate Action Summit. 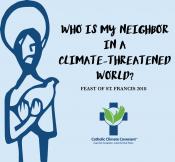 Now is the time to plan your 2018 Feast of St. Francis event. Watch the Feast of St Francis Promo video.

This year the Feast of St. Francis program: “Who Is My Neighbor In A Climate Threatened World" focuses on the interconnections between immigration, refugees, and climate change.

Register to receive your program guidehere. Program will be emailed to you around mid-August.

Reserve a space in your parish/school for October 4th (or a date of your choosing). The educational program is 90 minutes. You should plan to reserve the space for at least 2 hours.

On June 19th, The Hill published an Op-Ed, “Pope Francis Took the Climate Crisis to Those Who Can Fix It: Oil and Gas Execs”.

The article, co-written by the Covenant’s Dan Misleh and Dan Dileo, and Dr. Ramanathan (council member of the Pontifical Academy of Sciences) highlighted the recent meeting between Pope Francis and oil and gas executives. During the meeting, the Pope implored oil and gas executives to work to find viable solutions to the climate crisis including keeping most fossil fuels in the ground.

Missed the June webinar commemorating the third anniversary of Laudato Si’? You can watch it here.

Catholic parishes, academic, healthcare and other organizations are seeking ways to meet the challenges of Laudato Si' while reducing energy waste and promoting renewable energy.  Generating your own solar electricity instead of relying fully on your utility electricity makes sound business sense – it lowers your electricity costs and makes that cost more predictable. The largest obstacles Catholic organizations face to achieve solar adoption is finding the time, expertise and financial understanding to move forward. Catholic Energies solves these challenges.

Catholic Energies has assembled the technical expertise and financial resources to allow Catholic organizations to adopt and scale their use of solar power without the need, risk, or cost of owning and operating their own solar plant. We utilize all available federal, state and local tax incentives to provide the investors acceptable returns on investment, and pass through all financial benefits to the Catholic organization. The organization agrees to purchase the solar electricity at a predictable cost that is lower than its current utility cost. Catholic Energies handles the rest including design, engineering, permitting, construction, operations and maintenance.

The Laudato Si’ Challenge is wonderful effort to integrate Laudato Si’ into Catholic schools. Organized by the archdiocesan Office for Catholic Social Justice Ministry in cooperation with the Office of Education, Evangelization and Catechesis, the challenge aims to find way for schools to join the efforts of the archdiocese to pray, learn and act upon Pope Francis’ encyclical Laudato Si’.

The Archdiocese also produced a promotional video to increase action on creation care, which was publicly released at the service.