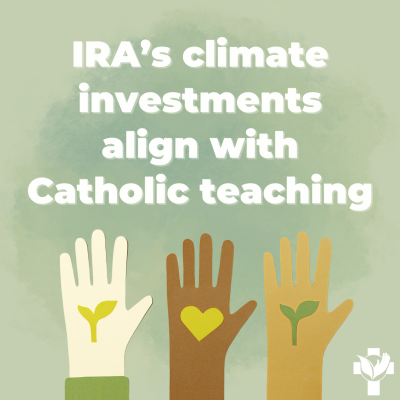 If you asked me earlier this summer about my level of hopefulness for significant climate action this year, my answer might have been dire, but my heart told me to keep the faith alive. And here we are – over the next decade, our nation’s climate investments will put the U.S. on a path to reduce emissions 40% below 2005 levels, effectively removing one billion metric tons of greenhouse emissions from the atmosphere. How did we get here?

On August 16, President Biden signed the Inflation Reduction Act (IRA) into law. This $737 billion investment and deficit reduction plan was negotiated for more than a year by U.S. Representatives and Senators. The final package includes $369 billion for climate change investments and programs, making it the single largest climate investment in U.S. history.

Many of the IRA’s climate provisions are filled with elements that align with Catholic social teaching.

The key negotiator in the U.S. Senate, Joe Manchin (D-W.V.) is Catholic, as is Speaker of the House Nancy Pelosi (D-CA) and President Biden, who signed the bill into law. The faith-filled elements of the Inflation Reduction Act promote human dignity and integral development, especially when considering how they align with environmental justice initiatives, economic justice, and caring for our common home.

Let’s start with how the law includes strong commitments to environmental justice and human dignity, thereby holding the value of human life sacred in the struggle against climate catastrophe. For example, IRA allocates $60 billion for improvements in air and water quality in directly affected communities, grants to reduce pollution and install clean energy in these same areas, and specific funding for coal miners with black lung disease to alleviate health costs. The law also deploys clean energy at a large scale to reduce particle pollution in the air from fossil fuels. This will help avoid up to 3,900 premature deaths and up to 100,000 asthma attacks annually by 2030.

And it supports families – the base units and building blocks of faith. To make each family’s energy transition more affordable, IRA includes clean energy and electric vehicle tax credits that will save the families who take advantage of them more than $1,000 per year. That means 7.5 million more families will be able to install solar panels on their homes with a 30% tax credit, saving these families about $9,000 over the life of the system. If the United States reaches its emissions reduction goals of 50% by 2030, every family will save an additional $500 per year on their energy costs. These family-focused boosts are coupled with large-scale investments in solar, wind, and battery infrastructure across the country, ensuring economic justice for more Americans than ever before through both energy savings, and millions of new good-paying jobs.

Functionally, IRA helps deploy the fullness of our Christian love by engaging the “Two Feet of Love in Action” published by USCCB, advocating for both charity and social justice. Just as the law directly responds to the megadrought in the West, it also looks to the future and begins to address the systemic environmental racism that plagues our country and makes climate disasters worse.

Finally, like our faith, our fight against climate change must unite us and be collaborative; the law itself demonstrates this. In a true “all hands-on deck” approach, IRA extends tax deductions for renewable infrastructure not only to commercial businesses but also to nonprofits, churches and religious organizations, Native American tribes, and nonprofit schools and universities. Our own Catholic Energies program is primed to help even more Catholic churches and buildings transition to renewable and lower energy costs.

There is still much to be done, however - IRA is far from perfect.

To pass through our extremely polarized Congress, IRA was made to include provisions for more oil and gas production, including drilling leases on federal lands and in the Gulf of Mexico. These giveaways to the powerful fossil fuel industry continue to disproportionately harm directly affected communities that already endure the worst of industrial pollution. The false solution of carbon capture and sequestration poses undue threats that cut against the grain of Catholic social teaching by failing to address the source of the problem: life-threatening emissions driven by burning fossil fuels.

Additionally, Sen. Joe Manchin (D-W.V.) forced inclusion of a provision that would permit completion of the Mountain Valley Pipeline through West Virginia. This comes alongside efforts by the fossil fuel lobby to create barriers against litigation by directly impacted communities such as Superfund sites. This deliberate counterwork represents steps backward, perpetuating fossil fuel production and practicing a message inconsistent with the one of emissions reduction that IRA puts forth. Rather than further exploiting the most impacted and vulnerable communities (and shielding more affluent communities from the realities of environmental racism), the clean energy transition must work for and with directly affected communities.

Overall, the Inflation Reduction Act marks a historic climate investment solidly aligned with Catholic social teaching that upholds many tenets of what our faith demands of us. IRA’s provisions can help us all act together toward the greater good as a nation and people. We at Catholic Climate Covenant and the Encounter for Our Common Home campaign live in the tension between its positive and negative aspects, calling for even more respect for human dignity as we steer our Church and nation toward deeper ecological conversion.