God’s Creation had four seasons – Will it always be? 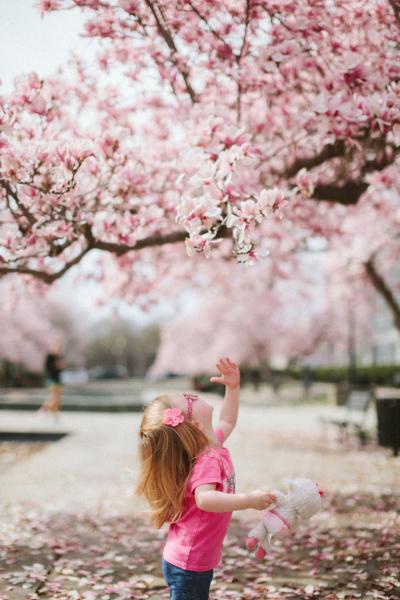 (Image by Karl Fredrickson via Unsplash)

More than two years into this pandemic, is there anything that gives us more relief, freedom, comfort and hope universally than going outside into nature? For people of faith, it almost always connects us to God.

As we gloriously experience it and as Laudato Si’ describes it:“Nature is nothing other than a certain kind of art, namely God’s art, …”(LS80)  “From panoramic vistas to the tiniest living form, nature is a constant source of wonder and awe. It is also a continuing revelation of the divine”. (LS85)   “…..nature as a whole not only manifests God but is also a locus of his presence.” (LS88)

But it has become apparent to those of us who seek out the beauty of the outdoors and each of the four seasons that the timing of the seasons is changing.

There is the early flowering of plants and the spotting of migratory birds earlier than usual, altering our springtime outings. The length of time for snow coverage affects our travel and ski plans, or even means we see artificial snow at the Olympics. The delays in peak fall foliage change our autumnal outings. For those of us in Washington, D.C., we see the peak bloom of the Cherry blossoms change – it is now six days earlier than it was in 1921.

These relatively new seasonal changes might be easy to dismiss or generally accept, but in the grand scheme of our interconnected world, and especially in the context of our faith, it is time to truly acknowledge the damage these changes spell.

Laudato Si’ states: “Nature is usually seen as a system which can be studied, understood and controlled, whereas creation can only be understood as a gift from the outstretched hand of the Father of all, and as a reality illuminated by the love which calls us together into universal communion.” (LS76)

There is plenty of proof we are altering creation itself.

A 2020 research report from the American Geophysical Union examined data for the period from 1952-2011 and found that the length of summer increased from 78 to 95 days, while the days of spring, autumn, and winter decreased (from 124 to 115; 87 to 82; and 76 to 73 days, respectively.) The researchers found that such changes in seasons can be mainly attributed to greenhouse warming by using statistical modeling examining the impact of greenhouse gases, anthropogenic aerosols, and natural forces on seasonal length. These changes will be exacerbated in the future even if the current warming rate does not accelerate.

The long days of summer will only get longer as time goes on – but all of our seasons are getting warmer.

The U.S. Environmental Protection Agency (EPA) has evaluated changes in seasonal temperature from 1896 through 2020. Their research confirms that since 1896, average temperatures in the U.S. have increased by about 3 degrees F in winter, 2 degrees in spring, and 1.4 degrees in summer and autumn.

God’s creation had four seasons, but we must ask ourselves if this will always be?

And how can we so easily accept these changes to God’s creation when Laudato Si’ reminds us we have a “…..human responsibility for nature. …. A fragile world, entrusted by God to human care, challenges us to devise intelligent ways of directing, developing and limiting our power.” (LS78)

When it comes to altering God’s creation, there is much more at stake than just beauty.

Hotter and longer summers increase energy demand for cooling, and impact human health with the increase in heat exhaustion and even heat-related deaths. Warmer winters impact crop yields due to insufficient chilling demand for bud dormancy. Earlier spring seasons may damage plants that awaken prematurely. Shorter winters with less snow may lead to summer droughts from loss of water from melting snow.

The changing seasonal clock disturbs agricultural seasons which affect food production; the rhythm of species activities which affect biodiversity; and the catastrophic effects we all feel with more frequent heat waves, storms, and wildfires will only get worse unless we change our course.

Health-related factors are also changing with exposure to more allergenic pollen and for longer periods due to the extension of the growing season. Tropical mosquitoes carrying viruses are likely to expand to new and larger areas bringing about potentially more disease-related outbreaks. The list of threats continues.

Our four seasons, and all of creation as God intended, need us to act now.

“This responsibility for God’s earth means that human beings, endowed with intelligence, must respect the laws of nature and the delicate equilibria existing between the creatures of this world,” Laudato Si’ states (LS68.) “Any legitimate intervention will act on nature only in order ‘to favour its development in its own line, that of creation, as intended by God.’” (LS132)