Don't Forget About the Polar Bears 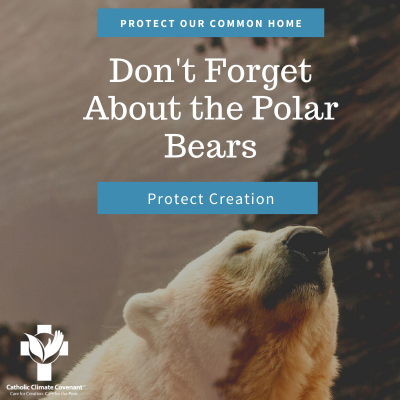 A forlorn-looking polar bear on a small piece of ice was once the quintessential image of climate change and its impact. In the past decade, however, the impact of climate change on human beings, particularly the vulnerable, has moved to the very center of the movement for climate justice and coverage of these issues in the press.

This is a positive development—both morally and strategically. It helps to demonstrate the true gravity of climate change, connects the issue to key values (such as the protection of life and human dignity) that should drive greater attention and action, and has motivated many people to take this issue more seriously than they once did.

When we think of climate change, we should think about its real human impact: the little girl in the Sahel whose ability to stay in school is threatened, the farmer from Guatemala who is forced to migrate in order to survive, and the young boy in the U.S. who must scramble to use his rescue inhaler because he now has asthma The unjust, unsustainable practices that drive global climate change threaten the lives and dignity of so many people.

But we are still hurting nature, too. And we should not forget about the threat climate change poses to polar bears, as the situation is grim, and our responsibilities in protecting God’s creation extend to concern for all species:

“Polar bears could become nearly extinct by the end of the century as a result of shrinking sea ice in the Arctic if global warming continues unabated, scientists said Monday.

Nearly all of the 19 subpopulations of polar bears, from the Beaufort Sea off Alaska to the Siberian Arctic, would face being wiped out because the loss of sea ice would force the animals onto land and away from their food supplies for longer periods, the researchers said. Prolonged fasting, and reduced nursing of cubs by mothers, would lead to rapid declines in reproduction and survival.”

In Laudato Si, Francis reminds us, “Because of us, thousands of species will no longer give glory to God by their very existence, nor convey their message to us. We have no such right.”

We do, however, have a responsibility to stop this potential extinction of one of God’s most majestic creations.

One place to get started today is to take the St. Francis/Laudato Si’ Pledge to care for creation and the poor, where you can commit to or learn how to lower your carbon footprint and learn about other climate vulnerabilities.