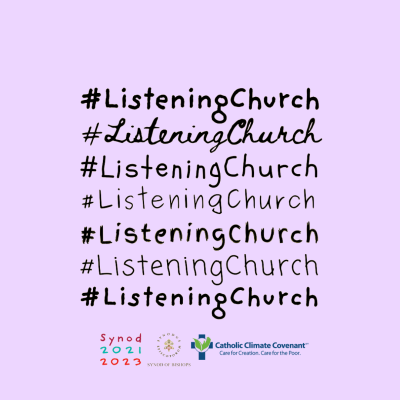 In a report submitted to the U.S. Conference of Catholic Bishops as part of the Vatican’s vision for the Synod on Synodality, “Catholic Climate Covenant heard a resounding cry from people across our various interactions for more institutional Church support and help for care for creation efforts.”

That is the conclusion in the 10-page report completed recently as part of the organization’s Synodal efforts, which took place over the past six months. Catholic Climate Covenant hosted or was involved in six mostly virtual consultation efforts related to the Synod on Synodality from January to June 2022. Covenant staff listened to different groups in the U.S. Catholic community as they expressed how the Holy Spirit is moving within and through them to live Laudato Si’.

In small, virtual Living Rooms conversations with people from more than 25 U.S. states, participants said they have implemented Laudato Si’ Action Plans in select ways, but accomplishments are generally the results of inspired parishioners and clergy members rather than a unified diocesan response. Other findings include:

In an online survey, respondents’ findings include:

In five Synodal Listening Sessions virtually in June, the phrase “uphill battle” came up again and again when speaking about working with priests. Other findings from those gatherings include:

In responses from Creighton University students, findings include:

Catholic Climate Covenant concluded in the report: “Most efforts are led and implemented by dedicated lay Catholic leaders and volunteers in parishes, schools and religious orders. People who are witnessing care for creation and Laudato Si’ efforts being implemented feel joy through those accomplishments. We heard more often, expressions of sorrow and disappointment in the lack of dedicated or consistent support from bishops, priests and other Church leaders to live out the call to care for creation.”