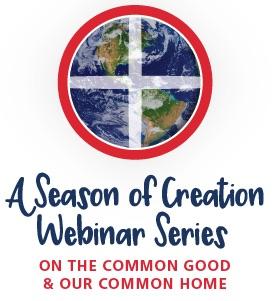 Washington, D.C. – The Catholic Climate Covenant today announced that during this year’s Season of Creation, it will host a five-part webinar series, “On the Common Good & Our Common Home,” for U.S. Catholics to:

The Season of Creation, celebrated annually between September 1STand October 4TH, is a special time for Christians. This webinar series is part of the global celebration, and Catholic Climate Covenant today also announced a new prayer guide for each Sunday during Season of Creation.

“As we are called to renew our faith in the God of all creation and join in prayer and action for the care of our common home, this webinar series will help us on our journey of love in action,” said Dan Misleh, executive director of the Catholic Climate Covenant.

The webinar series “On the Common Good & Our Common Home” includes the following conversations, with additional dates to be announced soon:

The first webinar of the series is “Catholic Social Teaching, Politics, and the Fullness of Faith.“ This will be the foundational webinar outlining the virtue of political participation and the foundations of Catholic social teaching as essential to the fullness of faith.

To register for Catholic Social Teaching, Politics, and the Fullness of Faith webinar go here: REGISTER for WEBINAR #1

The second webinar in the series, “Climate Change, Our Faith Values, and 2020”, is hosted by Interfaith Power & Light, Catholic Climate Covenant, and Young Evangelicals for Climate Action. This webinar will equip attendees on how to effectively hold ‘courageous conversations’ with your faithful family, friends, and colleagues about the importance of caring for Creation and voting our values.

To register for Climate Change, Our Faith Values, and 2020 go here: REGISTER for WEBINAR #2

More details on additional Season of Creation Webinar Series discussions will be announced soon and will be updated at www.CatholicClimateCovenant.org.

Today Catholic Climate Covenant also announced Finding God in the Wilderness, a four-part prayer series designed to be used each Sunday after Mass during the Season of Creation. To heal what Pope Francis calls “an ecological crisis,” Catholics are called to an interior conversion. The prayer program invites participants, like John the Baptist, to embark on a spiritual journey into the wilderness to encounter God in a new way, and to come forth ready to help inspire a similar conversion in others.

Each Finding God in the Wildernessservice lasts 15 minutes and incorporates a reflection on the Mass readings for each week, viewed through the lens of creation care. The Sunday Season of Creation prayer series culminates in Catholic Climate Covenant’s Feast of St. Francis program.

For more information on the Covenant’s Season of Creation resources visit: https://catholicclimatecovenant.org/resource/season-creation-2020

Catholic Climate Covenant is a national nonprofit based in Washington, D.C. that includes 19 U.S. Catholic partner institutions. It was formed under the auspices of the U.S. Conference of Catholic Bishops in 2006. The Covenant helps guide the U.S. Church's response to the moral calling to act on care for Creation including climate change and caring for the poor by educating, giving public witness and offering concrete resources.