Answering “What can I do?” 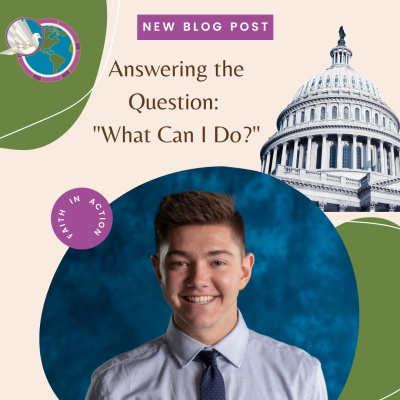 Putting our faith in action for our Common Home

“What can I do?” This is the question we at Catholic Climate Covenant hear most often from supporters – U.S. Catholics worried about climate change.

Climate change is scary – we already know that. Science tells us we are running out of time to avoid catastrophic damage. The most recent Intergovernmental Panel on Climate Change report has been described as a “code red for humanity” and researchers from Cornell University warn there could be 1.4 billion climate refugees by 2060. Extreme global temperatures and rising sea levels threaten human dignity at its very core - and frustrating inaction from both political and religious leaders deadens our spirits, making us question “what kind of world” people really want to “leave to those who come after us, to children who are now growing up” (Laudato Si’, 160).

Climate change is the most pressing social issue for my generation, affecting even our daily lives. Young Catholics are reporting such “climate anxiety” at unprecedented rates, but we don’t need to face this alone. The Catholic Church has affirmed climate change as a moral issue for more than 30 years, and Pope Francis makes it a clear priority in Laudato Si’ - the longest papal encyclical ever authored. The Church has also begun a three-year Synod on Synodality to more effectively listen and respond to the various “cries” of the Church – not the least of which come from the earth and the poor.

This is a critical moment for our voices to be heard both within and outside our Church. As presenters stated at a recent Georgetown University webinar, our priests and bishops need to hear and act upon our concerns for our Common Home. Our children need to be taught about care for creation in secular and religious education. Adult faith groups at our parishes need to study and pray about Laudato Si’, and our elected officials need to hear the important Catholic perspective on climate change again and again.

Beginning last week and continuing through the next few weeks, hundreds of Catholics across the country are meeting with their U.S. senators and asking them to support climate provisions that reduce dependence on fossil fuels, lower national greenhouse gas emissions, create jobs, and build the resilience of impacted communities. As the culmination of the Encounter for Our Common Home campaign, these meetings are rooted in Catholic faith and approach shared concerns about the future of our common home with both faith and reason.

This campaign is the first coalition-wide national advocacy campaign under the Vatican’s Laudato Si’ Action Platform. Catholic Climate Covenant joined ten partner organizations in spearheading this effort, recruiting over 850 people from 49 states and territories in just one month. Led by gracious and talented State Captain volunteers, delegations have already held nearly 20 meetings with Senate offices, with as many expected during the next two weeks.

A series of Covenant-hosted webinar events outlined the purpose of the Encounter and the unique aspects of our “ask” to our senators. They first tackled questions about the legislative landscape, why political advocacy on climate change is integral to our faith, and what makes our Catholic voices important. One week later, on April 19, the second webinar trained delegates on how to conduct a successful legislative visit. Presenters discussed best practices for conducting legislative advocacy visits about the particular “ask” of senators: support for $555 billion in climate provisions under consideration this year.

State delegations came together to schedule meetings and prepare for their “encounters,” which have been both virtual and in-person. Thus far, senators and staffers have been receptive to hearing about Catholic Church teachings on climate change and care for creation, with some expressing familiarity with Laudato Si’, Pope Francis’ 2015 encyclical on the environment. They have also responded well to the faith-based aspects of the meetings, which include an opening prayer calling the Holy Spirit into the group’s dialogue.

Senate offices already supportive of climate action have been encouraged to meet with their colleagues about these provisions. Senate offices not yet supportive of substantive climate action have still been impressed with Catholic climate action and the Encounter campaign. Nearly 60 people from Indiana met virtually with Senator Mike Braun, his Chief of Staff, and a legislative assistant last Wednesday. They were the single largest group Senator Braun has ever met with during a virtual legislative visit. The delegation included people from across the state, including women religious, priests, professors, young people, and even the support of two Catholic bishops. The Florida delegation was similarly able to confirm both senators’ willingness to meet with Archbishop Thomas Wenski of Miami – a significant victory given Senator Marco Rubio’s Catholic identity – while meetings with Senators Mark Warner and Tim Kaine of Virginia included fruitful conversations about this “encounter” methodology and potential legislative climate solutions.

As this first advocacy effort continues, reflection on the purpose of the Encounter campaign is important for discerning next steps. How does your heart feel, knowing there is now an opportunity to answer that burning question, “What can I do?”

Perhaps what we can all do is actually quite simple. We can – indeed, we must - rely on each other, trusting that though “the arc of the moral universe is long,” it always “bends toward justice.” This first iteration of the Encounter campaign will not be its last. We are building a network of Catholic climate advocates together in a faith-fulfilling spirit of encounter – and we need your help!

Join us at the Encounter campaign not only for future advocacy efforts but also to be connected with Catholics across your state (and across the country) acting on the through-line question of our time: “What can I do?”