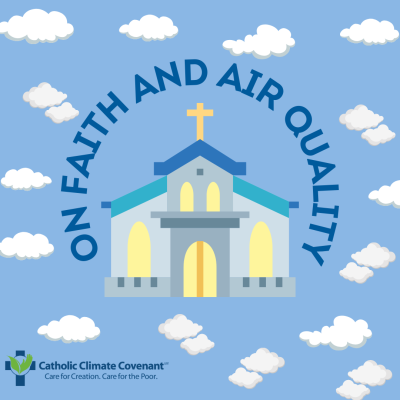 According to health experts, air pollution causes nearly one in five deaths worldwide, not only because it leads to lung and heart diseases, but also dementia and other ailments.

Now Dr. Janice Kirsch, a member of St. Augustine’s Social Justice Ministry in Oakland, CA, is doing something about it by following the pope’s lead, combining her faith with her concern for Creation. This summer she piloted a parish-based program to study air quality in Oakland, whose particle pollution from car traffic, waterfront ports, wildfires and oil refineries have led the American Lung Association to regularly rank it as among the top five worst urban areas for breathing.

Kirsch grew into her faith and work, as she says she was raised by “orthodox atheists” in California. But she sometimes attended Mass with childhood friends, where she was deeply moved by the idea of a sacrificial God who would “give everything and even be tortured” for humankind.

Receiving care as a child at a Catholic hospital increased her spiritual longings. “I knew I wanted to be a doctor and I wanted to be a Catholic.” In 2016, inspired by Pope Francis and his landmark ecological encyclical, Laudato Si’, Kirsch, finally took her leap of faith, joining St. Augustine Catholic Church in Oakland.

“Here is a spiritual leader talking about the two things that touched me most in my life,” she explained. “I want there not to be exploitation of people and I want there to be a chance for the natural world to persist and for us to have a livable planet long after I am on it.”

Now Kirsch, a physician and expert in public health, is all in, as she’s also a Laudato Si’ animator working with members of her parish, which sits Oakland’s northern hills, and a predominantly Black Catholic congregation, St. Columba, located in the “flatlands,” which is home to more industry and vehicular pollution. At her own expense, Kirsch purchased about 20 handheld air quality monitors that look like little eggs and asked volunteers to record outdoor measurements in the morning and during the evening rush hour. Indoor recordings will measure air quality in area homes. Participants will be allowed to keep the monitors, which cost about $130, Kirsch said. “It’s a bit of an incentive to join.”

“We hope to demonstrate any differences in pollution based on neighborhood, time of day, as well as how much that pollution that ‘seeps’ indoors,” Kirsch explained. “We will also check the efficacy of a simple box fan filter in remediating fine particulates.”

With data in hand, Kirsch and the other project participants plan to exert pressure on local air boards and city councils to provide commercial air filters to families who are most impacted by air pollution from fossil fuels. They also plan to publish analysis of the study in an environmental journal and reach out to media and local decision-makers in the hopes of drawing attention to the problem of fine particulates from fossil fuel combustion and associated health hazards.

Seniors who live near high-traffic areas, including Oakland’s I-580 and I-880 freeways, experience more health problems and pay more in health-care costs due to diseases than residents in other neighborhoods, according to a separate study recently conducted by the Environmental Defense Fund and Kaiser Permanente. Vehicles are the primary source of the pollution, which costs neighborhood residents hundreds of dollars more per year in health care due to emergency room visits and outpatient fees.

Earlier this month, the Bay Area Air Quality Management District urged residents to stay indoors and reduce their energy consumption amid a state-wide heat wave that has strained the state’s energy grid and increased air pollution.

Kirsch sees air pollution as an issue of environmental justice, as poorer areas are often more likely to suffer from unhealthy smog. “We’re going to pressure the decision-makers to ask them what they have done to provide people with the air filters they need,” she said.

It’s her duty, she said, as a public health expert and a Catholic, to respond to “the cry of the Earth and the cry of the poor,” as Pope Francis says in Laudato Si’.

“I have pledged to spend most of my time now on what I see as the greatest human public health challenge humans have ever faced: climate chaos and the environmental emergency.”