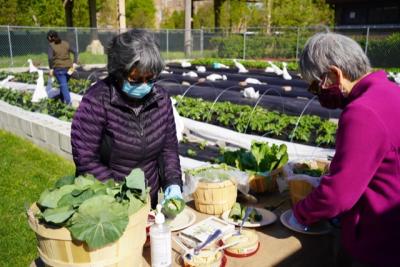 St. James Catholic Church on the South Side of Chicago takes walking seriously, much like the pilgrims devoted to its patron saint. And while a new Laudato Si’-inspired labyrinth the parish is planning won’t be nearly as long as the famed Camino de Santiago, it can still be a source of spiritual sustenance, parish leaders said.

“We want it to be a place where people can come and experience grace,” said Amy Pellettiere, the Vitality Coordinator at St. James, “even amidst all of the noise and busyness of the city.” 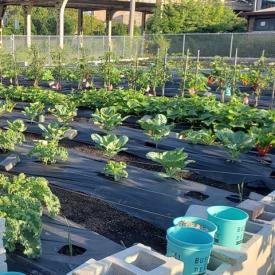 Even with the infamous elevated trains rattling by and occasionally disrupting Mass, St. James is becoming something of an urban oasis in its historic Bronzeville neighborhood, a concrete-heavy enclave. An old Gothic sanctuary at the parish was demolished in 2013 after a church fire, leaving an empty plot of land. Two years ago, the parish teamed with the urban farming group Just Roots to build a flourishing 18,000-square-foot-farm on the former sanctuary’s footprint.

Today the St. James Community Farm produces 10,000 pounds of fruits and vegetables a year, with half going to community-supported agriculture, and the other half sold at a farmer’s market or donated to the parish’s food pantry, which feeds some 1,500 families each month.

Following the lead of Pope Francis, the parish draws a connection between hearing the “cry of the earth” and “cry of the poor,” calling its sustainability-minded urban farm a response to both.

“The farm is part of our evangelization,” parish leaders said in a written reflection on the Laudato Si’ Action Platform, a Vatican-led, international campaign to increase ecological sustainability. “It attracts people to our faith, connects us with neighbors and with creation, giving new meaning to the ‘joy of the gospel.’”

But the parish, founded in 1855 and run by the Missionary Servants of the Most Holy Trinity, thought their neighbors -- including students from nearby Illinois Tech and residents of housing projects -- needed more than nutritious meals.

A recent grant from the Victory Noll Sisters through Catholic Climate Covenant will help St. James add a Laudato Si’ labyrinth to its growing greenery, providing a place of respite for harried city dwellers. 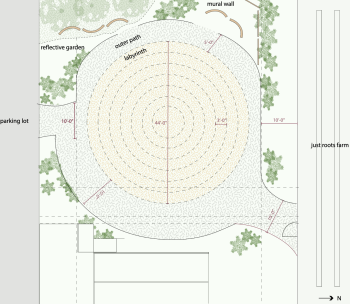 The seven-circuit labyrinth will be nearly 50 feet in diameter, with concrete circles to enhance accessibility to people living with disabilities, said Van Bensett, a member of St. James who has been part of the planning committee. Architectural students from Illinois Tech and a parishioner who happens to be a master gardener will also assist. The blueprints include a memorial wall and garden, landscaping with native plants and a shaded garden for prayers and meditation.

“Once the farm went in, we started looking for a more holistic way to feed our community,” said Pellettiere. “It’s not just about nourishing people physically, but also spiritually. The labyrinth will be a beautiful way to combine those two spaces. People can come and feed their souls as well as their bodies.”

In their reflection on the Laudato Si’ Action Platform, St. James’ parish leaders said the labyrinth will represent “our connection to creation and our efforts to heal our wounded world.”

“With Pope Francis, we dare to dream, knowing that walking creates the path. Like the Camino de Santiago, dedicated to our patron saint, St. James the Greater, we welcome people of all faiths and cultures to walk with us, the ordained with the confirmed, the affluent with the poor, men and women, young and old,” the reflection reads.

“By walking together, the common good becomes holy ground as our God of mercy heals wounds caused by division and trauma.”

With its urban farm and in-the-works labyrinth, St. James is putting its faith into action. Asked how other parishes might follow their lead, Bensett said it only takes a few dedicated volunteers to make a difference.

“You don’t need to get everything done in six months,” said Bensett, “you just keep building towards it. The big thing is to have the vision, then you seek out the connections.”

Among the other 2021 Victory Noll Sisters grant awardees are college campus ministries, parishes, elementary and high school creation care programs, charities, agencies, state Catholic conferences and communities of men and women religious. To view a full list of winners, click here.   The 2022 grant winners have not yet been announced.