Climate migration is here to stay unless we act now 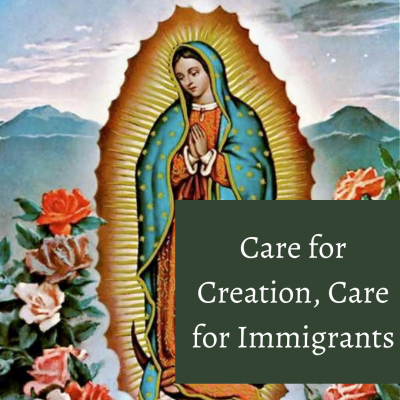 Tomorrow, December 12, marks the 5th anniversary of the signing of the Paris Agreement and it’s also the Feast of Our Lady of Guadalupe. When you give to our year-end campaign from now until midnight, December 13, your donation will be matched dollar-for-dollar (up to $5,000!) by a generous donor in honor of these special events. Help us reach our fundraising goal this weekend and see below why forced migration due to climate change is just one reason to support our work. Thank you and blessings!

When I worked at the U.S. Department of Housing and Urban Development a few years ago, they announced the first “climate resilience” grants to help U.S. communities dealing with the effects of climate change. One of those grants ($48 million) was for the residents of Isle de Jean Charles, a coastal community in southern Louisiana, to help relocate their tribe to higher ground. Since 1955, residents there have seen their island home shrink in size from 22,000 acres to 320, a loss of 98 percent! What was once land or marshland, is now water. They were our nation’s first official “climate refugees.”

This coming year the Catholic Climate Covenant is embarking with our partners and all U.S. Catholics on several bold initiatives to more fully integrate Laudato Si’into the U.S. Church – from our families, Catholic schools and parishes to even health and business sectors. We know Catholics can make a faithful difference in combatting climate change, which leads to catastrophic results including forced migration by the most vulnerable.

The Isle de Jean Charles Band of Biloxi-Chitimacha-Choctaw Tribe continue to discern their future. Nevertheless, they are among many U.S. communities whose homes are threatened by a warming climate. In this year of the great pandemic, we saw climate catastrophes from coast to coast that forced people to into shelters. These catastrophes included a record hurricane season in the east, wildfires burning millions of acres in already fire-damaged communities in the west, and repeated devastating flooding in the heart of our country.

After suffering multiple disasters, many families simply pick up and move if they are able – leaving behind homes, community, jobs, stability, family. Those who remain may have less ability to move. Often Black, Latino and Indigenous communities are heavily affected.

The same is true all over the world. For example, in Honduras right now, back-to-back Hurricanes Eta and Iota left some 1 million people jobless and homeless. Out of desperation, many will migrate to areas with more opportunity including north to the U.S.

When migrants arrive—whether it’s from a city in the U.S. or another country—how do we welcome them, and do we even consider how our actions may have led to their migration?

In Laudato Si’, Pope Francis writes: “Climate change is a global problem with grave implications: environmental, social, economic, political and for the distribution of goods. It represents one of the principal challenges facing the poor…. Sadly, there is widespread indifference to such suffering, which is even now taking place throughout our world. Our lack of response to these tragedies involving our brothers and sisters points to the loss of that sense of responsibility for our fellow men and women upon which all civil society is founded.”

The Covenant’s work includes helping U.S. Catholics hear and understand these stories. Your support is vital if we are to bend the nation’s will and action toward climate justice. If not now, when will we finally respond with the will that is needed to protect our Common Home, and our neighbor? We pray to the Virgin of Guadalupe to light our path, and the path of those forced to leave home.