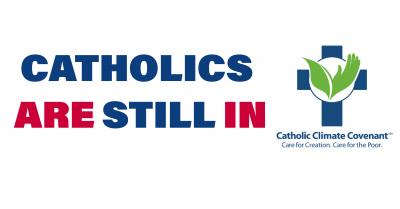 Printable version of the FAQs

1. What is the Catholic Climate Declaration?

2.  How is the Catholic Climate Declaration related to the We Are Still In Campaign?

The CCD complements and expresses US Catholic solidarity with the We Are Still In Campaign.

3. Is concern about climate change new for the Catholic Church?

NO! In 1990, Saint John Paul II warned that the “’greenhouse effect’ has now reached crisis proportions as a consequence of industrial growth, massive urban concentrations and vastly increased energy needs.” Since then, Pope Emeritus Benedict XVI, Vatican discasteries, the U.S. Conference of Catholic Bishops, international bishops’ conferences, communities of women and men religious, and theologians around the world have affirmed the reality of human-forced climate change as a moral issue.

4. Why does the Catholic Church care about climate change?

The Church knows that the effects of climate change (e.g., rising sea levels and increased drought) compromise the future of our common home, threaten human life and human dignity, and disproportionately harm the poor who contribute least to the problem. In short, the Catholic Church cares about climate change because this reality harms creation, which God intended as a gift for everyone “to cultivate and care for” (Genesis 2:15).

5. What is the Catholic Church’s position on the science of climate change?

Saint John Paul II reaffirmed the wisdom of Pope Leo XIII that “truth cannot contradict truth.”The Catholic Church recognizes the truth identified by scientific inquiry. The scientific community’s consensus on climate change is exemplified by the National Oceanic and Atmospheric Administration, which states: “Multiple studies published in peer-reviewed scientific journals show that 97 percent or more of actively publishing climate scientists agree: Climate-warming trends over the past century are extremely likely due to human activities.”Faced with this truth, the Church insists that prudence requires action to address climate change: In facing climate change, what we already know requires a response; it cannot be easily dismissed. Significant levels of scientific consensus—even in a situation with less than full certainty, where the consequences of not acting are serious—justifies, indeed can obligate, our taking action intended to avert potential dangers. In other words, if enough evidence indicates that the present course of action could jeopardize humankind's well-being, prudence dictates taking mitigating or preventative action (U.S. Conference of Catholic Bishops, “Global Climate Change: A Plea for Dialogue, Prudence and the Common Good”).

6.  What is the Catholic Church’s position on climate change and population?

The Catholic Church has consistently recognized creation care as a pro-life issue because humans are creatures who are injured by environmental degradation.In 1991, the U.S. Catholic bishops observed that “our tradition calls us to protect the life and dignity of the human person, and it is increasingly clear that this task cannot be separated from the care and defense of all of creation.” In 2010, Pope Emeritus Benedict XVI pointedly asked, “How can we separate, or even set at odds, the protection of the environment and the protection of human life, including the life of the unborn?”The Church teaches that means to address climate change must meet its official standards of morality – standards that exclude abortion and forced sterilization, among other things. Since nations with low birth rates often have high carbon emissions per capita, the Church focuses on reforming the lifestyles, industries and policies of industrialized nations as ways to address climate change.

7. Why does the Catholic Church support public policies to address climate change?

The Catholic Church teaches that states exist to protect and promote the common good of which the climate is part (Compendium of the Social Doctrine of the Church #168-169). The Church also espouses subsidiarity, by which problems are addressed with the lowest possible but highest necessary level of state action – including “international political action” (Compendium of the Social Doctrine of the Church #185-186, 442). Since climate change is a global challenge that less coordinated efforts have failed to adequately address, the Catholic Church has repeatedly called for an international climate change agreement (e.g., Pope Emeritus Benedict XVI in September and December 2009, 2010 and 2012).

8. Do voluntary initiatives like the Catholic Climate Declaration and We Are Still In Campaign mean that we now don’t need a public policy like the Paris Agreement?

NO! Climate change is still a global problem that requires a global solution, and the U.S. Conference of Catholic Bishops laments that President Trump’s “decision not to honor the U.S. commitment to the Paris agreement is deeply troubling.” Until the U.S. honors the Paris Agreement, however, voluntary initiatives like the Catholic Climate Declaration and We Are Still In Campaign will help lead the nation towards meeting the Paris Agreement goals.

9.  What does the US Catholic community hope to accomplish with this Declaration?

We wish to tell the world that the U.S. Catholic community cares about the fate of our common home, that we are in solidarity with the one human family, and that we will fulfill our “differentiated responsibilities” as citizens of the global superpower historically most responsible for climate change (Laudato Si’ #52).

If you lead a Catholic organization (e.g., parish, school, college/university, health care facility, etc.), you can sign your institution on to the Declaration.

If you are a member of a Catholic organization, you can urge your leader (priest, bishop, president, etc.) to sign the Declaration. Click here for a step-by-step guide to this process.

Once you have taken these steps, you can: